Recently, Dutch historian Rutger Bregman wrote a 528-page book arguing that most people are decent. Then how is it we’re collectively dumping 8 millions tons of plastic waste into our oceans every year? Doesn’t sound very decent at all.

We reckon it all comes down to awareness. You can’t help solve a problem until you know it exists. Until you have the information and opportunity to do something about it. Which is why we spend quite a bit of our time and money creating awareness campaigns that stand out. Globally and in our three main markets Germany, Belgium and the Netherlands.

A film to raise awareness and fighting single-use plastic on the pitch.

Our fight against single-use plastic water bottles requires behavioural change. It requires people to change their daily habit. Which is tough as nails, but it can be done. As proven by the reusable bottle revolution we’ve witnessed since we introduced the Dopper Original back in 2010. Part of the key to success is intrinsic motivation, support and the promise of result.

Enter, the Dopper Brand Movie. A beautiful 90-second film featuring a diverse group of wavemakers from around the world. Each with a unique story of how they help protect our oceans from plastic, illustrating the power of individual change in the fight to save our oceans.

A film to raise awareness about the fact that every individual can make a difference. As showcased even further by the accompanying mini-documentaries highlighting each of the wavemakers. From Lilly Platt, a 12-year-old activist living in the Netherlands, to Miss Donna-Ray Jones, a drag queen entertainer who gives plastic a second life on stage.

Single-use water bottles? Not in my sport.

What do you do when you want to ban single-use water bottles from sports? You team up with some bad-ass athletes to shake the system. Together with them, we (re-)introduced the Dopper sport cap. An accessory that transforms any Dopper into a water bottle fit for medal winners. To empower sportspeople everywhere to kick single-use water bottles out of their yoga studio, off their field and off their mountain. Or wherever they prefer to get their sustainable sweat on. 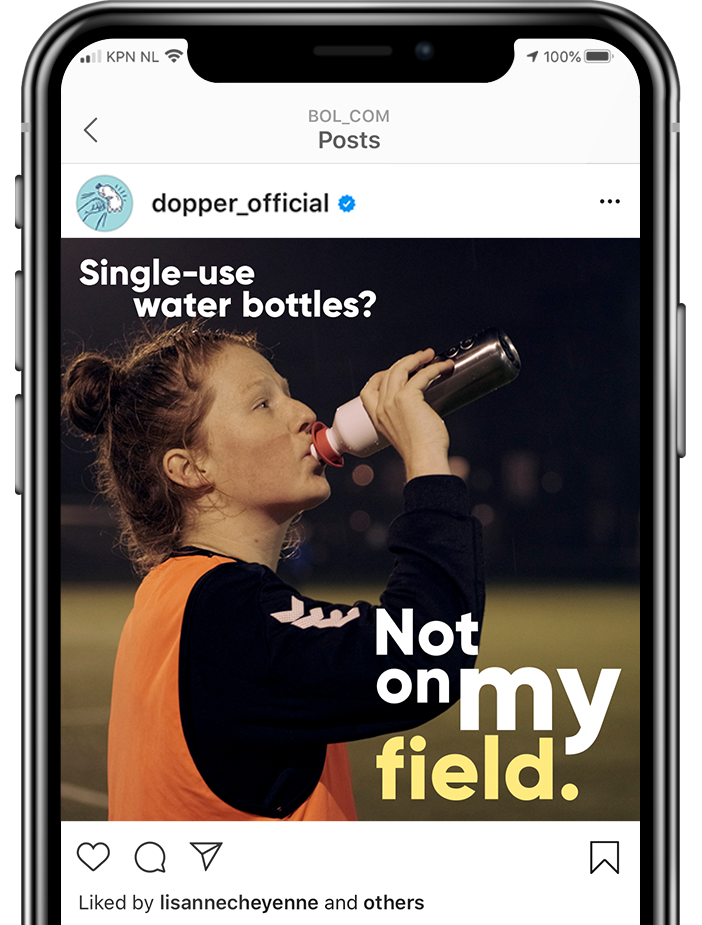 Meet perhaps the biggest Dopper ambassador of all. Our CEO Viriginia Yanquilevich. We dare anyone to spend 10 minutes in a room with Virginia and not come out ready to change the world. The woman is inspiration personified. And lucky for the world, she enjoys sharing her enthusiasm on stage.

In 2020, lockdowns couldn't stop her as she virtually fired up the audience and answered questions at PinkRoccade, Rijksuniversiteit Groningen, NCD, Fempower your growth, Too Good To Go, TOMS, Bonduelle, B Corp, Dopper Deep Dives, Ace & Tate, BNI, Interstuhl and Bol.com.

Dopper on the runway, on the train, online and in the wild.

Dopper on the runway

Back in January 2020, when we were blissfully unaware of the rough waters up ahead, we started the year off with quite the show. Literally. During NEONYT, a part of Berlin Fashion Week fully focused on sustainability, our Dopper bottles with handy carriers were all over the runway. Proving what we’ve been saying for a decade: that a reusable water bottle should be part of any outfit. And that you can take yours anywhere, in style.

Dopper on the train

We’ve known for a long time that the cool people of Berlin are the perfect match for our bottles battling plastic pollution. We also know that for some reason German people still drink an average of 140 litres of bottled water per person, per year – with a preference for the fizzy kind.

So in 2020, we put ourselves out there – more than ever before. We started the year off with two weeks of train banners pointing people towards their tap. Because unsurprisingly, the kick-ass city of Berlin provides kick-ass tap water, ready to drink.

Later in the year, we took our courtship online. No, we don’t mean Tinder. We’re talking a good old banner ad campaign. A campaign designed to show Germany exactly who we are and what we stand for. Honest and unapologetic. Inviting people to become part of our bold movement and to deliver a serious ass-kicking to single-use plastic water bottles together.

Dopper in the wild

When you’re aiming for world domination by reusable water bottles (preferably Doppers, but those are details), you’ve got to reach a big audience. So aside from snazzy train banners and fancy ad campaigns, we took our message to the streets. Did our wild postering result in greater awareness? Well, we don’t know. Because we didn't measure it. (Point of improvement for next time.) Did it look totally badass? Oh yes, it did.

Raising awareness with partners in crime.

The biggest Dopper you’ve ever seen

What do you get when Dopper teams up with one of the biggest banks in the country? An amazingly successful awareness campaign around drinking from the tap. Oh, and a 3-metre high Dopper bottle, complete with water tap inside.

During several weeks, we went on our very own Tour de Belgique, visiting Antwerp, Brussels and Liège together with Dopper Wave member Rabobank.be. Encouraging people to choose a reusable water bottle, and letting them in on a little secret: saving our oceans saves you money. Win-win. 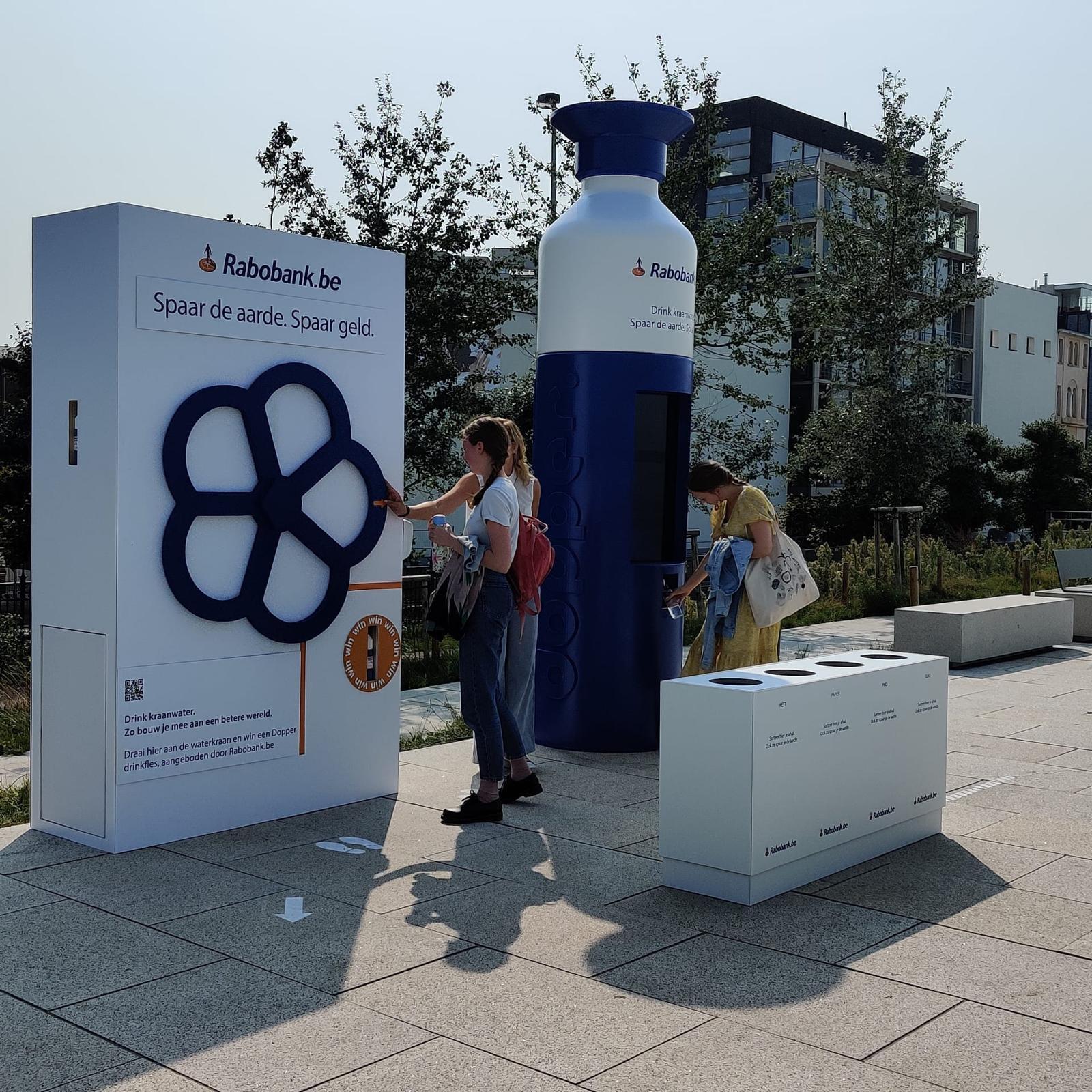 Ads on a mission

After more than a decade, we can recite our mission backwards while making a sandwich at 3 in the morning. But our research tells us that’s not the case for everyone. Take Belgium, where people drink an average of 134 litres of bottled water per person per year. We'd like to change that.

So, in 2020 we invested in an online awareness campaign to get across a simple message with a simple goal: encourage people to say no to single-use plastic water bottles, to protect our world’s waters.

Tapping into an ocean-saving community.

Guess what we did on World Cleanup Day? Clean up, yes - very clever. But as with everything we do, we did it in style. From our SUPs. On the Amsterdam canals.

Together with Indosole, Conscious Hotels, SUP SUP CLUB, SUP clean-up Foundation, Trshbg, DEUS EX MACHINA, SUP Cleanup Amsterdam, and a selection of enthusiastic lovers of clean water, we collected 10 buckets full of (plastic) waste from the Amsterdam Canals. Which we then handed over to the CLEAR RIVERS who will give the waste a second life.

Dopper uses different kinds of cookies (and other techniques) and gathers information about the use of the website to analyse and improve, for social media and to make sure you see relevant information and advertisement. Read more about our cookies. If you want be shown relevant information and advertisement, we would like to receive your approval. Therefor you need to click the accept button below. You then give us approval to make use of these cookies and to gather information by us and third parties on the websites of Dopper.